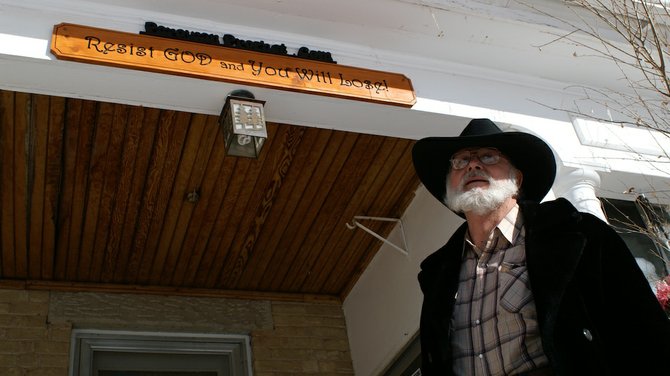 Leland Freeborn, better known as the Parowan Prophet, has dedicated the past 30 years to warning the public of a massive nuclear attack. Photo by McKenzie Romero.

Leland Freeborn, better known as the Parowan Prophet, has been preaching preparation against a massive nuclear attack on the United States for more than 30 years, which he says he’s 99 percent sure will come in the next few weeks.

However, he says that if this year’s predictions prove as fruitless as previous ones, he won’t be disappointed.

Freeborn preaches he received a vision in 1975 in which he was called as a seer for the people and saw an attack which would begin a global conflict lasting 42 months.

“This isn’t the end of the world, it’s the start of World War III,” he said. “The surprise (attack) that I’ve seen is when the snow is on the ground and the Christmas lights are up, the day is very short and nights are long.”

Since then, Freeborn has dedicated his life to providing all who are interested with instructions on how to prepare for what he sees as eminent danger. The 69-year-old bearded cowboy, who now must use a wheelchair or crutches to get around, bases his operation out of his aging home in Parowan. Drivers approaching the home can see a motor home parked out front, advertising free survival information and decked with a flaming mushroom cloud. Over the house’s front door is the message “Resist God and you will lose.”

As each winter comes, he spends his days getting ready for the worst. But as the threat passes, Freeborn said he’s not disappointed, because it means he has another year for more people to stumble upon his survival information.

So why this year?

In the original vision that Freeborn had in 1975, the Lord told him the attack would come “in the third year.” Ever since then he has been wondering “the third year of what?”

In August, Freeborn announced on his website, parowanprophet.com, that the answer had come to him: “We are in the third year of the Obama tenure in office.”

Freeborn said he hopes his message will reach SUU students, who he sees as part of the group of strong young people that will be responsible for rebuilding the country following the attacks he has forseen.

Freeborn’s survival teachings are only one part of his mission. He preaches a Christianity based on the early teachings of the Church of Jesus Christ of Latter-day Saints, but with some doctrines dissenting from the church’s accepted beliefs and practices.

Freeborn’s experience began in 1964 when he, then a successful farmer in California, joined the LDS church. He was an active member, and a few years later decided to move his wife and two children to Utah to raise his family in a predominantly LDS community.

As Freeborn re-established his livelihood in Utah, he purchased land in Parowan and Milford. In a flight that would change his life, the plane Freeborn was piloting crashed on Oct. 25, 1975, and he fell into a three-week coma. It was during that time that Freeborn said he received the instruction that set him on his path.

“I went through the veil to the other side and spent three weeks there,” he said. “(I) did not want to come back … but the Lord said he’d visit me from time to time, and so I came back, and woke up in a hospital in Salt Lake City.”

As Freeborn recovered from his injuries, he began to share some of the visions he had seen during the coma, including those of nuclear attacks and the re-institution of plural marriage.

Freeborn was excommunicated for preaching plural marriage; the LDS church abolished the practice of polygamy in 1890.

Over the years, Freeborn has attracted a small group of followers, and he and his congregation adhere to the Bible, The Book of Mormon and the Doctrine and Covenants, the same books of scripture as the LDS church. However, Freeborn said his beliefs on revelation go further.

“Christians — whether they’re Baptist, Methodist, Presbyterian, Lutheran, or what — they all believe in Jesus Christ … but the Mormons believe more,” he said. “Well, I believe more than the Mormons do.”

Freeborn guides his followers with the revelations he says he receives regularly, as well as by visions received by other members of his congregation, many of which are published on his website.

Garrett Fredlund, a Parowan resident and one of Freeborn’s followers, also claims to have received revelation for the congregation, specifically one in August supporting Freeborn’s calling as a prophet.

“I think this is going to be the month,” he said as he and Freeborn discussed their preparations for the coming weeks. “I’ve been here seven years now, and I think it’s going to be any day now. There’s nothing left.”

Freeborn said his response as to why his message includes preparation for the end and not just Christian beliefs is simple — it’s what he was called to do.

“There are millions of people that believe (in Christ) already,” he said. “What God sent me back to do was warn people about nuclear war, to give them survival information.”

The group’s survival efforts will be part of a documentary film titled Training for the Apocalypse, which is set to debut on the National Geographic channel early next year, according to the production team. The film’s director, Rob Vanalkemade of Los Angeles, said the film explores individuals and groups preparing for doomsday scenarios. Vanalkemade and his crew discovered Freeborn through an article in the Los Angeles Times three years ago.

“I met with Leland and his congregation several times over three years,” he said. “He was always a gracious and considerate host ... As a documentary subject he was generous with his time and, in his way, always answered any question we had with honesty and flexibility.”

But Freeborn was unique among the documentary’s subjects, Vanalkemade said.

“How Leland differed from other people we worked with on this project, and I think Leland would probably agree, was in the vast range, from very endearing to despicable qualities that he embodies,” he said. “I believe this will come across powerfully in the program, which aims to leave you caring about Leland no matter how much you might hate or suspect his viewpoints.”

A trailer and information about the documentary is available at finaltraining.org.

As the end of the year approaches, Freeborn said he will continue to stock his homemade bunker with supplies for handling nuclear fallout, cover his windows with plywood, keep his website updated and pray.

And if nothing happens?